With the possibility of a sale to a third party, four people — Kelly Saito, Molly Bordonaro, Patrick
Wilde and Brent Gaulke — emerged from within the firm to buy out its investment management arm. The deal went into effect in April.

The shift didn’t get much attention until, in January, two events were disclosed on the same day: Mark Edlen, who cofounded Gerding Edlen with the late Bob Gerding, had started an entirely separate venture called Edlen & Co. to focus on affordable housing; and Gerding Edlen Investment Management had been rebranded to Green
Cities Co. The name change was meant to reflect the company’s commitment to sustainability.

Green Cities Co. has been busy. Later in January, the newly rebranded company bought two multifamily buildings, one in a Boston suburb and the other in Portland, with a total of 450 units between them.
The Business Journal spoke with the Green Cities Co.’s Saito and Bordonaro in February. The conversation has been edited for brevity and clarity.

Can you take me behind the scenes of the moves last year to actually acquire the company.

Molly Bordonaro: Kelly and myself and Patrick and Brent, who are now owners, had been running the investment management business for the greater part of the decade in terms of building it. And Mark was very good about recognizing the need to create some sort of succession plan. And actually, starting about two years ago, we potentially looked at selling their ownership to a potential third party. And as we went through that process, we collectively realized (that it was in the best interest) for our investors and for the firm and for our employees … to buy out the retired partners. And so we worked on that for about six months and successfully closed on it April 1, 2020.

You have the joy of owning the business, but then the fright of this global pandemic that we’re all going through. It must’ve been a really difficult and exciting time at once.

Kelly Saito: That is true. … It’s interesting that if you think about the two biggest events that have really changed and resulted in the business that we are today, both happened in or around these two most recent and significant global events. We really started the investment management business (during) the Great Recession.

Bordonaro: We’re actually really grateful that we did this transaction because it’s created an ability to be free from that negotiation and to be very nimble and 100% focused on driving our business and our team through the challenges of the pandemic.

Kelly, you’ve said that the name change “doubles down on our commitment to having a positive environmental and social impact.” What does that doubling down mean on a day-to-day, operational level?

Saito: We’re in the process of building that, but just to give you a very concrete example, and tying back to the two acquisitions we made…part of the analysis in the diligence that was done on both properties was a thorough evaluation of all of the things that we could do to improve the property across the spectrum of financial performance, its place within the community (and) environmental performance.

Bordonaro: We also fundamentally believe that everything that we (do) from an
(environmental, social and governance) perspective actually adds value to our assets, and there’s no question that we’re seeing that in terms of tenant retention.

You obviously worked with Mark Edlen for years. What’s the biggest lesson he taught each of you in terms of being effective in real estate?

Saito: What I learned from him was an unwavering tenacity coupled with unmatched real knowledge and approaching business from a relationship (perspective). He would always talk about taking the high road and doing the right thing.

Bordonaro: I would say the one lesson he taught me was to not be afraid to be innovative in real estate, and that is absolutely embedded in the DNA of the firm.

What it does: Investment management

What it used to be: Gerding Edlen Investment Management 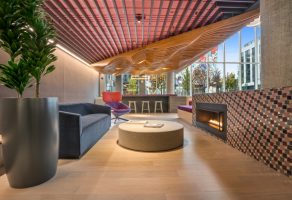